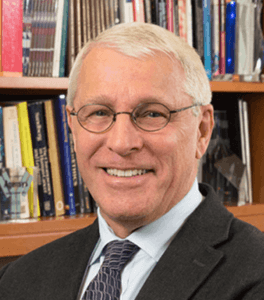 Owen received his undergraduate degree from Cornell and his M.D. from Stanford University. He completed postdoctoral research at MIT, then joined the faculty at UCLA where he was appointed a University Professor by the University of California Board of Regents, an honor reserved for scholars of the highest international distinction. Owen is also a professor of microbiology, immunology and molecular genetics, the UCLA David Saxon Presidential Chair in Developmental Immunology. He is the Director of the Eli and Edythe Broad Center of Regenerative Medicine and Stem Cell Research at UCLA. Owen has made significant contributions to the understanding of human leukemias, immune disorders, and epithelial cancer stem cells. His work includes the discovery of tyrosine kinase activity for the ABL gene and the demonstration of the BCR-ABL oncoproteins in human leukemias. This has had practical impact in leading to the development of kinase-targeted therapy as an effective treatment for these leukemias and other cancers. His work also led to the co-discovery of Bruton’s tyrosine kinase (“BTK”), which is required for normal B-lymphocyte development and, when mutated, leads to X-linked agammaglobulinemia, a form of immune deficiency. New inhibitors for BTK are in clinical practice for the treatment of certain lymphomas and leukemias. Recent work has concentrated on defining the stem cells for epithelial cancers of the prostate and other organ sites to help define new types of therapy for these diseases. His work utilizes advanced whole-body imaging techniques, such as positron emission tomography to monitor cancer growth and cellular immune functions. Owen is a member of the National Academy of Sciences, the American Academy of Arts and Sciences, and the National Academy of Medicine. Recognition for his research includes the Milken Foundation Award in Basic Cancer Research, the Rosenthal Award of the American Association for Cancer Research, the Dameshek Prize of the American Society of Hematology, the Alpert Foundation Prize, the Leukemia & Lymphoma Society’s de Villiers International Achievement Award, the UCLA Faculty Research Lecture, the Nakahara Memorial Lecture Prize, and the AACR G.H.A. Clowes Memorial Award. Owen currently serves on several editorial and advisory boards, and he previously served on the Board of Directors for the American Association for Cancer Research. In 2012 he was appointed by President Obama to the President’s Cancer Panel and served until 2017.